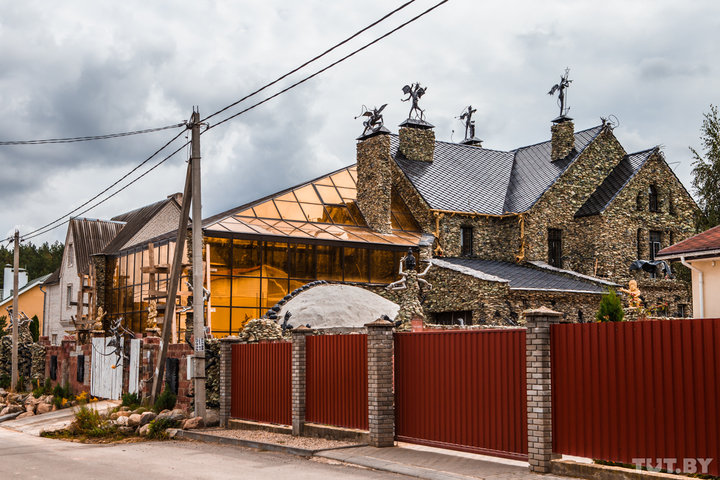 «I have photographed this house with my smartphone and later showed to colleagues at work. After a while I deleted all those photos so that there were no traces of those devils left even in my smartphone’s memory. – says Ratomka’s local, Maria Nikolaevna – The house looked appealing from first sight and my granddaughter was comparing it to a magical castle. Although, when you spend time looking at those black devils’ hands and sculls sticking out of fence and even more devils appearing on the roof you just start to understand it’s too overwhelming. Since then while walking around with my granddaughter I choose the path remote from this house to avoid approaching it too close. It’s scary even for adults to stroll here in the dark evenings as demons on the roof (those that are smaller) are shining the flashlights».

Maria Nikolaevna stops by the house and stares at it with curiosity in her eyes even though observing it not once in the past. Her shoulders unintentionally shook as she noticed a scull in the fence with wires sticking out of its eyes.

— Surely, soon sculls will also be illuminated to shine in the dark similar to devils on the roof, — Maria assumes.

Meanwhile, the neighbor appears on the street. His house yard is immediately behind the extraordinary house fence. The neighbor isn’t much satisfied with looks out of his windows and yard.

— House owner looks like an ordinary entrepreneur. Easy to conclude this man is gifted with amazing imagination by looking for example at his car featuring sculls in its exterior design. House construction had been initiated around a decade ago, but has been terminated till two years ago when the owner appeared again and construction works continued. You see the result in front of you…

Another local comes by. She hides her smile while taking photographs of the devil that climbs the fence with its tongue boldly sticking out.

— This house is already considered to be a local attraction. Personally, I see nothing terrifying in here; although, I definitely would not live in such a house by myself, — she mentions.

She also adds that not all neighbors are tolerant to the same extent. Locals are afraid of demons’ arms protruding from fence as well as arbor having its cupola laid with sculls.

— Alexander, our neighbor, sent a complaint to the local executive committee, — says one women. —  Chairperson and deputy arrived, stood for a while and simply left. Indeed, what can they do in this situation? This house is a private property. Owner possesses peculiar imagination and seems to have funds to bring his imagination to reality. Difficult to consider how much have spent on building this house. How expensive it was to decorate house facade and fence (from both sides) with jadeite stone which is extensively used here. It’s immediately clear the person planned bringing something unique and marvelous to reality. And well, he succeeded.

Previous Post На EuroVelo-2: Litovka village Next Post How to visit Brest and its region without a visa
Menu